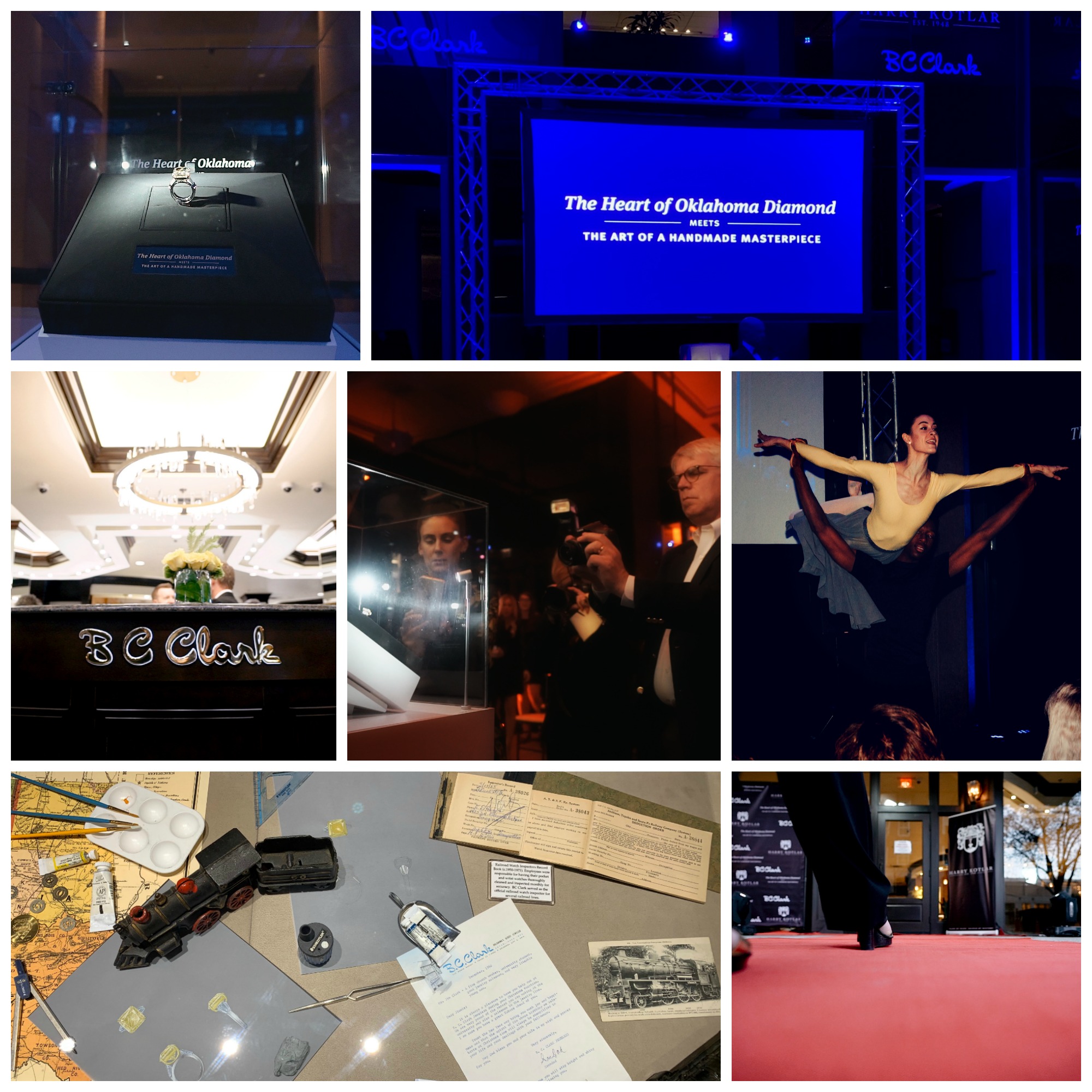 (OKLAHOMA CITY) – Harry Kotlar stole the show on November 14, 2019. This multi-sensory, invitation-only red carpet event in Oklahoma City brought all Harry Kotlar owners and special guests to the downtown BC Clark Jewelers location to witness the reveal, discover pieces from the Harry Kotlar’s 70th anniversary collection and Vault Collections, learn the history and creative process, create their own masterpieces and more.

Harry Kotlar was commissioned by BC Clark to create a luxurious handcrafted jewel incorporating their 18.92 carat Heart of Oklahoma diamond, created to honor the store’s heritage and founding year of 1892 as well as celebrate the great state of Oklahoma. The superior quality Internally Flawless, Fancy Intense Yellow diamond symbolizes the intense and colorful sunsets that stretch for miles over the Oklahoma plains. The Harry Kotlar masterpiece, which cradles the 18.92 carat diamond, showcases the heritage of Oklahoma with its impeccable ring design.

The Heart of Oklahoma Diamond was placed in a ring setting carefully crafted by Harry Kotlar’s master Italian artisans. The setting was created with a geometric design reminiscent of a steam locomotive’s pilot grills with the use of tapered baguette diamonds. This simple, yet elegant piece is timeless and represents a piece of BC Clark’s history as Oklahoma’s oldest business under the same family ownership.

“BC Clark is honored to have partnered with Harry Kotlar to create this masterpiece,” said Coleman Clark, President of BC Clark Jewelers. “Unveiling the Heart of Oklahoma Diamond Ring at such an elegant and interactive event with Harry Kotlar at our flagship downtown store with some of our most loyal customers has been a moment I will always remember.”

Guests were given a behind the scenes look at the design process of the Heart of Oklahoma Diamond set in a Harry Kotlar masterpiece as well as the opportunity to create their own Harry Kotlar pieces with a Harry Kotlar illustrator on site. Seven Harry Kotlar masterpieces, one for each decade of the brand’s existence, was showcased in a museum-style exhibit with a unique audio guide. Guests were able to discover a spellbinding exhibition of Harry Kotlar’s iconic and sought-after collections including its hallmark design, the Artisan Pavé, the Kotlar Cushion®, the contemporary Kotlar 1948 and jewels worn on the red carpet today curated to guide the audience of the brand’s depths of expertise in its craft and history.

“Bringing this luxurious event to Oklahoma City has been an amazing experience,” says Czarah Cabrera, brand director for Harry Kotlar. “The Heart of Oklahoma Diamond set in a Harry Kotlar masterpiece is something we are very proud to be a part of and we hope this piece will create an appreciation for the beautiful art of jewelry making, art, history and beyond.”

A Starry Night Reveal to Remember

Blue is the perfect complement to amber and yellow tones, and 101 Park Avenue building’s atrium was awash in azure hues and stars twinkled in the ceiling with the use of innovative mood lighting. The color gave the space a dreamlike atmosphere, pulling elements from one of the greatest post-impressionists of all time, Vincent Van Gogh. “The transformation is not just about making the film and exhibit space look pretty and theatrical, it was about forging emotional, artistic and historical dialogues, says Czarah Cabrera, Brand Director for Harry Kotlar. “It is about bringing forward the artists’ soul and emotional intensities as they create masterpieces, while paralleling B.C. Clark Sr.’s journey in 1892 to Indian Territory and his life in Purcell, as well as our founder’s determination for safe passage from WWII full of love, passion and tenacity.”

A three-minute film highlighting the romance of creating the masterpiece accompanied the unveiling. The film turned back time by showing the closely-guarded techniques of Harry Kotlar’s master artisans as well as Oklahoma’s history and BC Clark’s journey. It depicted how artisans create this masterpiece steeped in history and the personality of the human touch.

As a surprise element,  a special ballet performance in the form of a pas des deux  was incorporated for the big reveal reinforcing the importance of the masterpiece cradling the exceptional diamond  as well as illuminating human emotions and intentions. Right after the reveal, the lights magically shifted from deep blues to more vivid yellow hues.  It was the perfect way to introduce the Heart of Oklahoma Diamond in a Harry Kotlar Masterpiece.

The unveiling of the Heart of Oklahoma Diamond in a Harry Kotlar Masterpiece presented a fusion of two great legacies. “Harry Kotlar and BC Clark have enjoyed a close business relationship for almost 30 years,” said David Weiner, President of Harry Kotlar. “This masterpiece is a great symbol of our shared history.”

Harry Kotlar is recognized as the premier source for impeccably cut diamonds, handmade heritage jewelry, its hallmark design – Artisan Pavé and “The World’s Most Brilliant Cushion Cut Diamond” – Kotlar Cushion®. Established in 1948 as a diamond house in California and progressively evolved into a jewelry design house designing pieces that evoke old-world artistry with modern sophistication. Each Harry Kotlar piece is made by a team of Italian master artisans who have dedicated their life’s work to the love and passion of jewelry-making, creating the world’s most stunning diamond rings, bands, earrings, bracelets and necklaces that celebrate individuals’ story eternally. For more information, visit www.harrykotlar.com

BC Clark, founded by Benton Clyde Clark, has been serving Oklahoma since 1892 in Indian Territory. Today, BC Clark is Oklahoma’s oldest jewelry store and the oldest business of any kind in Oklahoma operating under the same name and family ownership. The traditions of quality merchandise and personal service have continued through the years under the leadership of B.C. Clark’s son, B.C. Clark, Jr., grandson Jim Clark, and great-grandsons Coleman Clark and Mitchell Clark. Now with three Oklahoma City stores, the Clark family continually introduces new designer jewelry lines and other luxury brand products.  For more information, visit www.TheHeartofOklahoma.com

Journey of the Diamond and Masterpiece: www.TheHeartofOklahoma.com

Creative endeavors behind the project:  https://issuu.com/harrykotlar/docs/facets_of_art_and_style_for_consumers