All Heart, All Luxury: Harry Kotlar and Shreve & Co. held an Exclusive Event to Benefit the American Heart Association 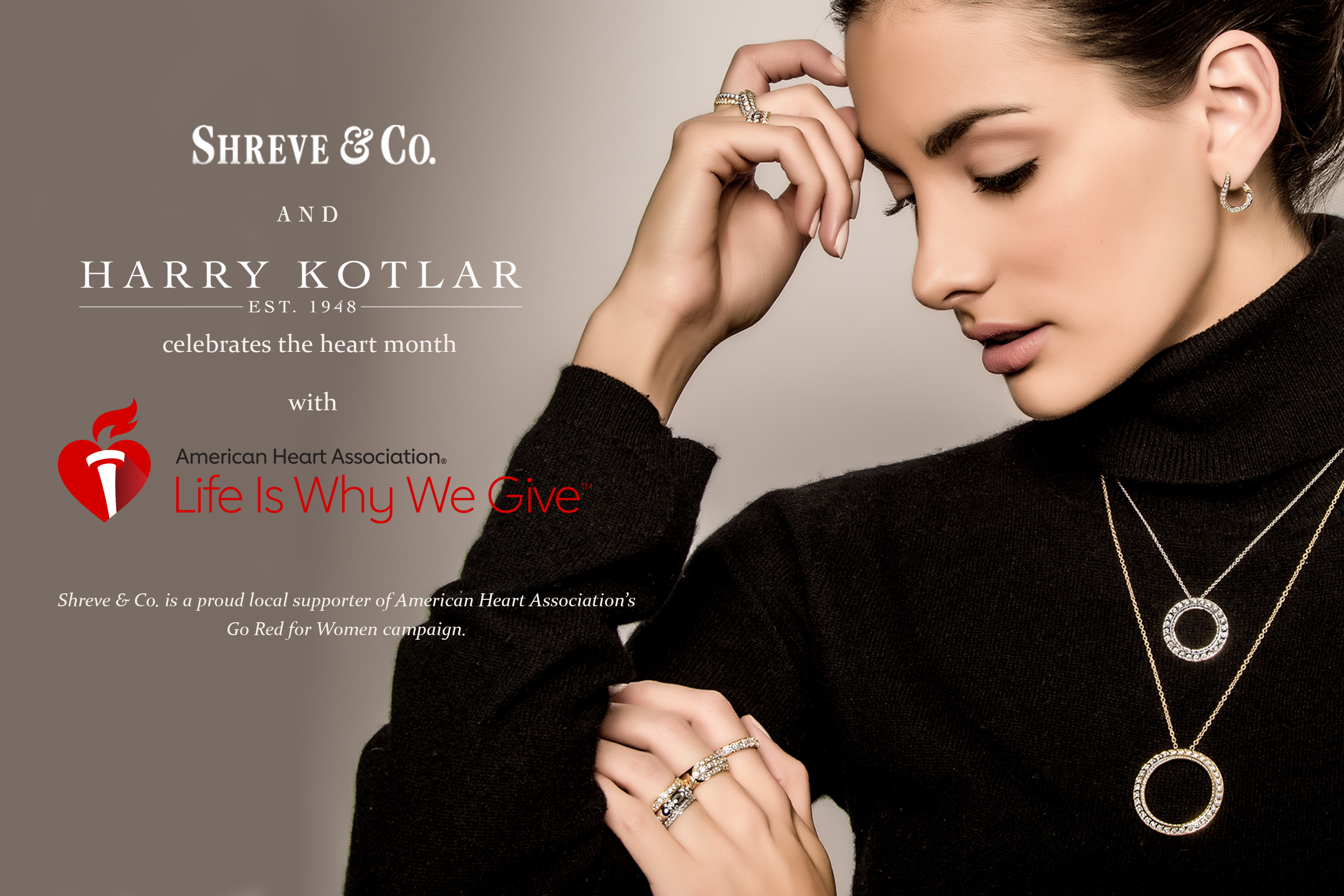 All Heart, All Luxury: Harry Kotlar and Shreve & Co. Held an Exclusive Event to Benefit the American Heart Association

SAN FRANCISCO, CA. — It was a night of compassion buoyed by an unsurpassed commitment to luxury and elegance. For Heart Month, Shreve & Co. partnered with the esteemed jewelry house Harry Kotlar to hold the Shop for a Cause celebration. The uplifting event took place on February 7 at the historic retailer’s San Francisco flagship boutique.

Twenty percent of proceeds from Shop for a Cause went to support the American Heart Association’s (AHA) Go Red for Women initiative. The program is one of the AHA’s signature campaigns. Go Red for Women is a movement created to raise awareness and serve as a catalyst for the improvement of the cardiovascular health of women around the world.

At the heart of Shop for a Cause was a closed-door shopping event. The intimate affair was exclusive to VIP guests invited by Harry Kotlar, Shreve, and the AHA.

“This was a meaningful occasion for both Harry Kotlar and Shreve,” said Czarah Cabrera, brand director for Harry Kotlar. “Both our companies hold the American Heart Association in the highest esteem, and we set out to create an event worthy of our guests. And to do that, we had to reinvent the shopping experience.”

Harry Kotlar’s effort to enliven that shopping experience was evident in the new and exclusive pieces it debuted at the event. The jewelry house created three pieces from the Kotlar 1948 collection for the American Heart Association. These unique pieces incorporated luscious rubies. These stones mirrored the AHA’s official color, and are regarded as symbols of good health, fortune, and love.

The 1948 collection presents a more contemporary take on jewelry design. Pieces from the 1948 collection — including the ones sold at Shop for a Cause — are bold and assertive. They come resplendent in Artisan Pavé (Kotlar’s hallmark design) and Hearts and Arrows stones.

A Stunning Masterpiece is Revealed
The three pieces weren’t the only jewelry to debut at the event. Harry Kotlar revealed a one-of-a-kind masterpiece: a single medallion, which is part of the Black Series. As the name implies, the medallion is held by a chain of majestic and entrancing black diamonds. Originally considered unappealing, the esteem of these unique stones grew when King Louis XVIII added a black diamond to his collection of rare gems.

This singular piece boasts of a Criss Cross pattern of Artisan Pavé embedded in 18k rose gold. Being Harry Kotlar’s hallmark design, the Artisan Pavé stones bear multiple lifetime’s worth of expertise of our master craftsmen. A final flourish of black diamonds and Hearts and Arrows melee diamonds completes the medallion.

The event also highlighted Harry Kotlar’s 70th anniversary, which it is celebrating this year. To commemorate this milestone, the jewelry house exhibited its 70th Anniversary Collection, a gathering of seven stunning pieces. Each piece represents a decade in the company’s history, and carries the spirit and glamor of those years. It offers a glimpse into the ever-evolving artistry of Harry Kotlar, and the impeccable workmanship of its master craftsmen.

This was truly a museum-quality experience. The journalists, tastemakers, and influencers in attendance were able to experience the company’s history via audio commentary, as well as a video wall playing the lauded short film about the company’s heritage. Guests also received an exclusive coffee table book, which gathered seven decades’ worth of love, tenacity, and passion within its pages.

But if this were a museum, it was one that didn’t just linger on the past. The event also showed an enticing glimpse into Harry Kotlar’s ever-increasing level of quality and craftsmanship.