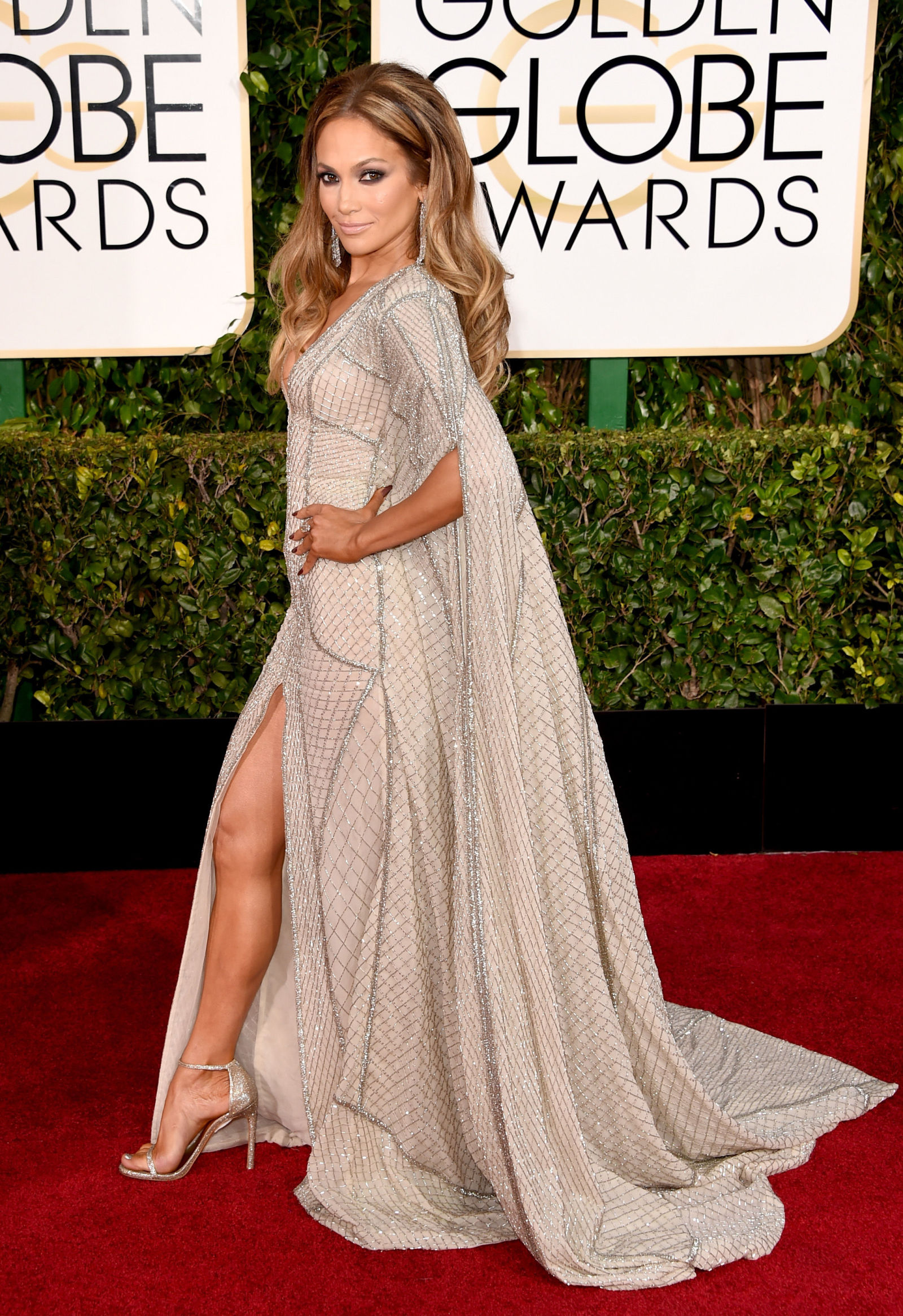 Nude tones and metallic beading characterised many gowns from regional designers this year at the Golden Globes in California. Flick through our slideshow to see which celebs looked resplendent in designs from the region.

First up in the Middle East fashion stakes, actress and singer Jennifer Lopez. The mother-of-two wore a Zuhair Murad Fall 2014 couture gown in sandy gold. The dress had a distinctly 1920s feel with its geometric silver beading and a paneled cape-cum-long train. A generous front split allowed J-Lo to show off her toned legs while understated Stuart Weitzman sandals and a Jimmy Choo clutch completed the look.

Designer details: Zuhair Murad grew up in Baalbek, Lebanon and always had ambitions to be a designer. He began sketching dresses at 10 and says “I don’t recall a day in my life without a pen in my hand”.

Murad opened his first atelier in Beirut in 1997 before rolling out collections for Alta Roma and Paris Haute Couture Week. Ready-to-wear lines for day and eveningwear soon followed, as did showrooms in the heart of Paris. Today, he works mainly from his native Lebanon in a dedicated maison in Gemayze, at the centre of Beirut.

Reem Acra was the designer favoured by the American actress Anna Faris at the awards ceremony in the Beverly Hilton Hotel on Sunday night. The actress wore a floor-length gown from Acra’s Spring 2015 collection with a reflective oyster sheath dress featuring a beaded sheer top layer. The 38-year-old opted for a relaxed updo, smoky eyes, simple strappy heels and no bag.

Designer details: Lebanese designer Reem Acra launched her label with a bridal collection in 1997 after being discovered by a fashion editor while attending the American University of Beirut. Six years later she introduced a prêt-a-porter collection distinct by its luxurious fabrics, playful patterns and understated chic. Stars of stage and screen to have worn Acra’s design include Angelina Jolie, Catherine Zeta-Jones, Jane Fonda and Olivia Munn. Acra is a member of the Council of Fashion Designers of America and serves on the board of the Dubai Design & Fashion Council.

One of the best-dressed stars to attend the 2015 Golden Globes was actress Kate Beckinsale. The British beauty was red-carpet ready in a couture gown by Lebanese designer Elie Saab.

The dress featured a dusky grey skirt with concealed side-split and a sequined top with plunging neckline. Beckinsale accessorised with jewellery from Bulgari and heels by Salvatore Ferragamo.

Designer details: A designer who almost needs no introduction, Elie Saab – sometimes known as ES – is a self-taught fashion talent. He says his interest in dressmaking started when he was just nine years old, when he began making clothes for his sisters. Saab opened his first couture atelier in 1982 and debuted haute collections in Paris in 2000 before opening his flagship boutique in the French capital a year later. The 50-year-old Saab has always maintained a studio in Beirut, a city he continues to use as a source of inspiration today.

Model Chrissy Teigen looked pretty in pink at the Golden Globes. The 29-year-old wife of John Legend chose a candyfloss beaded gown from the Spring 2015 collection of Lebanon’s Zuhair Murad. Standout features of the dress included a low-scooped back and a fishtail skirt with peak-a-boo paneling. Teigen accessorised with jewellery by Harry Kotlar and a clutch bag by Tyler Alexander.

Designer details: It wouldn’t be a red carpet without some to-die-for diamonds. Harry Kotlar, famed for its hallmark design of the artisan pave dubbed “the world’s most brilliant cushion cut diamond”, is a house with six years expertise to draw upon. Teigen settled upon pared-down diamond studs and a statement ring by Kotlar for the Golden Globes this year.

Zuhair Murad’s haute couture collection for Spring 2014/15 was one of his best yet so it’s probably no wonder that more than one star opted for his creations on Sunday. The collection was awash with floaty, Grecian gowns with thigh-high splits in shades of teal, ruby, royal blue and minky grey. Murad also included heavily beaded pieces with racerbacks, lattice and bugle stone detailing.

The actress Jessica Chastain attended the Audi Golden Globes party at Cecconi’s restaurant in Los Angeles last Thursday. She opted for an Elie Saab pre-fall 2015 embellished dress, which was lengthened to the knee from the shorter catwalk version.

Chastain teamed her sparkly black cocktail dress with Claudette sandals by Jimmy Choo. No clutch and no jewels either for the 37-year-old-star, just tousled, side-parted hair and a slick of pillar-box red lipstick.

Designer details: We’re loving Saab’s pre-fall collection and its emphasis on fur collars, bold floral prints and A-line mini-joupes in jet, blush and electric purple. Chastain could have chosen from one of the Lebanese designer’s many bags from the collection, including a quilted black shoulder number with gold chain strap or a smart gold-paneled box clutch.